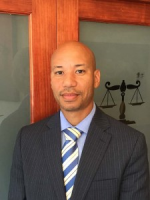 “My greatest experience as a lawyer has been the opportunity to protect other people’s rights. There is no better feeling than knowing you helped someone through a difficult point in their life.”

Steven was named the “Young Attorney of the Year” by Loyola Law School alumni for his leadership while coaching the mock trial team that advanced to the national championship finals in 2004 and 2005.

Steven is a native of Chicago, Illinois and a 1990 graduate of Whitney M. Young Magnet High School.